Joanie and Adam are a married couple with four kids – three are grown up. Their fourth is blessing! Shortly after giving birth, Joanie got sick. Adam took time off work and managed to keep the family afloat on a reduced income to give Joanie time to recover. However, the couple knew it was just a matter of time before their debt became unmanageable. At the time, the couple owned a home. Four years ago they made the responsible decision to sell the house to pay off debts. Now that Joanie has fully recovered and three of their kids have left the nest, the couple is ready to make a fresh start and get back into homeownership. They have saved up $40,000 for a down payment. Through our rent-to-own program, they will have time to repair their credit and build up a bigger down payment to be mortgage-ready in 2025.

———————————-
Employment
Combined, Joanie and Adam earn $185,000 yearly and have stable income. Joanie works for LendCare as a Collections Manager. She has been with the company since 2016 and earned $125,000 in 2020. In 2017, Adam took initiative and started his own contracting business. He owns and operates a renovations company, Onesto Renovations Inc. He reports $60,000 annually as personal income.

———————————-
Credit
Joanie has very good credit. Her score is in the high 600’s and she is carrying less the $10,000 in debt. Adam took a hit when Joanie got sick. Although Adam is not carrying any debt, needs time to build up his credit again. This mature couple is eager to have stability again and are motivated to work with a Clover Properties-approved mortgage broker to be mortgage-ready in four-years.

———————————-
Property
The couple found a beautiful bungalow in a waterside community of Little Britain in the City of Kawartha Lakes. The property is on a private lot with hot tub and inground pool. The home boasts 3+2 bedrooms and 2 baths. It is a very well-maintained and cared for with many new replacements such as pool lines, soffits, eavestroughs and the back portion of the roof have been replaced in the last few years. Little Britain is 50 minutes from Pickering where Joanie works and just 15 minutes outside of Lindsay. City of Kawartha Lakes has a population of almost 75,000 people and includes such areas as Lindsay, Little Britain, Bobcaygeon, Fenelon Falls and others. This property is in the middle of Hwy 7, 35 and 12 so plenty of access back towards the 407 and 401. 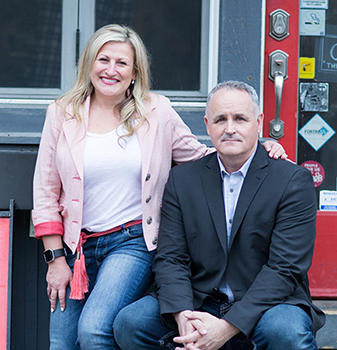 Rachel and Neil OliverCo-Founders, Managing Partners
Need a Mortgage Partner for Your Next RTO?
If you’re craving cashflow but have only cash to invest, let’s explore a Joint Venture.
Contact rachel@rethinkrentals.com

Contact me for more information or if you have any questions: rachel@rethinkrentals.com